We round the headland and see the island for the first time: a distant ridge of bare granite with a lighthouse on one end. At the same time we hit the swell and the wind sizzles spray off the wave tops, whipping it into our faces as we drive the kayaks forward. For a moment I wonder if this island might be a little far out for us, too far from the safe inner channels that we have been following for two days now.

Back at our starting point in a kayaking centre on the island of Tjörn, the owner, Patrik, had been very clear about our options, pointing out various camping spots on the 8,000 islands and islets that are scattered to the north of Gothenburg. Each had its advantages: this one was sheltered from easterlies, that one had a grassy flat area. But one particular island had caught my eye: Räbbe Huvud. It was far from any settlements and close to a nature reserve on a much larger neighbouring island.

Niall, my son, leads the way across the straits and into the lee of the island. It astonishes me how quickly we have adapted to sea kayak life, instinctively seeking shelter from the wind or zigzagging across open water to avoid getting side-on to the waves. Once in the shadow of Räbbe Huvud we relax and examine the place.

“It looks wild,” shouts Niall. There are no trees at all, just great piles of massive pinkish granite, all eroded and rounded and split by winter ice, each one a Henry Moore masterpiece. We spot a tiny landing beach and head in. The sea suddenly becomes dark and spits tiny silver fish. The sand sighs as it strokes the underside of the kayak. A cuckoo calls. We make landfall.

Kayaks pulled up on the east shore of Kälkerōn island

It was in the excellent book Wild Scandinavia that I had spotted a brief entry concerning the Swedish province of Bohuslän and its islands. I liked the idea of a multi-day wild camping adventure in what was described as a sheltered archipelago. Unfortunately, we had arrived as a period of good weather ended. Patrik had pointed out danger points, and escape routes: narrow ginnels between islands, some only a few metres wide. 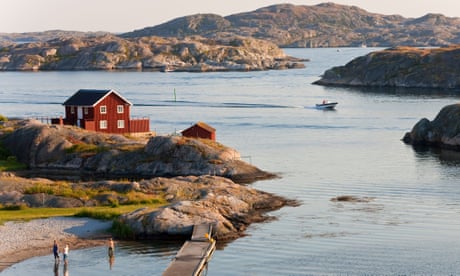 “You’ll get through here at high tide and avoid that big bay.” For five days, Patrik insisted, we should forget everything except wind and tide. Nothing else mattered. All food needed to be bought before departure at the supermarket down the road. We stocked up, realising too late that no alcohol over 3.5% is sold in Swedish supermarkets (the state outlets, Systembolaget, sells stronger stuff). Then we had enjoyed a sumptuous final breakfast next door to Patrik’s kayak shop in a café called Lottas, a place that deserves its growing fame. Our own food plan was simple: new potatoes cooked in sea water, washed down with thin beer and black tea; fruit and biscuits for dessert, fresh fish would be a bonus. We prayed for driftwood and dry kindling.

The first night was on Grimsholmen, a lovely island, uninhabited but within sight of a village. Our prayers for dry driftwood were answered and a camp fire cooked the spuds. No fish were caught. Next day was a five-hour paddle, passingthe fishing towns of Skärhamn and Kyrkesund, where we stopped for coffee and made the decision to go for the remoter island.

Fish at last! … mackerel caught and cooked at the island of Räbbe Huvud

Back on Räbbe Huvud we erect our tent (a freestanding model helps as sometimes you might pitch on rock) and head off to explore. We swim in a fabulous deepwater creek, full of bronze kelp, schools of fish and sudden glimpses of crabs. (Our small lobster creel, set here overnight, catches edible and velvet crabs, two fish and a large eel, all of which we set free.) Above water the island is a miracle of survival: tiny plants make homes in cracks, and insects thrive. We leap across dark narrow gorges and shimmy up slabs of smooth stone. Later we catch mackerel on a spinner. I feel I could happily stay for weeks, but the wind rises overnight.

At dawn we sneak away, clinging to the coast, and slip into a sheltered channel, Stigfjorden, that leads into a vast area of sheltered sea and islands. One of them, Kälkerön, is another nature reserve, and we circle the island looking for the right camping spot. In one bay there are barbecue pits, grassy pitches and a little sea cliff hung with ropes to swing on. There are signs of other campers here, but in the entire trip we don’t encounter another person on any of the islands.

Taking in the view on Kälkerön island.

Despite all the attractions of this site, the wind has veered and we move on, finding a sheltered spot on the north shore. As the long summer evening stretches out, almost to midnight, we explore what proves to be a magical island: huge ramparts of rounded granite piled up in ridges then, hidden between them, deep canyons filled with emerald forests of birch, fir and bilberry. On the tops we find mysterious sundew ponds and magnificent views across the fjord.

That night the wind rises again and morning reveals a sea swarming with whitecaps. Stigfjorden is not as sheltered as we hoped. With some trepidation we bash across it, breathing sighs of relief when we reach a serene side fjord. Once again we find a great camping spot, paddling into a small bay flanked by granite cliffs, then drifting right up to deer grazing on the shingle beach. At night, our fire is the only light we can see apart from the stars.

On the fifth day we meet Patrik at the appointed place. We are weary – the last paddle was a battle against the elements – but elated. It has been a remarkable experience. Could anyone do this trip? Patrik is confident they can. “I chat to people and assess their abilities. For real beginners or small children we have a quiet lake. For experienced kayakers, there’s no limit.”

We finish with another of Lottas’ superlative breakfasts, not a cheap experience, but we have not spent anything for several days, so why not?• The trip was provided by Visit Sweden (visitsweden.com). Kayak hire is 490 krona (£42) a day, including lifejacket, map and safety instructions from Kayaktiv (kajaktivtjorn.se).Hav & Logi has simple twin rooms from £50 a nightand holiday homes from £160 a night/£800 a week. There are flights to Gothenburg from several UK airports